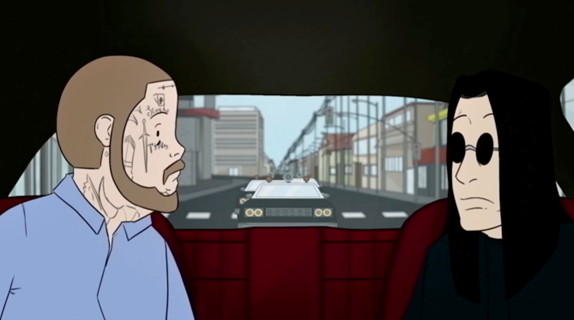 Later today (February 11), OZZY OSBOURNE will premiere a new animated video for “It’s A Raid” from his #1 and acclaimed 2020 ORDINARY MANalbum. The clip will debut at 7:30 PM (ET)/4:30 PM (PT), with OZZY and collaborator Post Malone set to host a watch party beginning at 7:00 PM (ET)/4:00 PM (PT) on OZZY’s official YouTube channel.
At a SiriusXM listening party last year to celebrate the release of ORDINARY MAN (Epic Records) OZZY recounted the song’s inspiration. While recording Black Sabbath’s VOL. 4 in Bel Air, California, OSBOURNE triggered the home’s security alarm and police surrounded the home, which he says had “piles of marijuana and cocaine.” OSBOURNE adds, “I’m shouting, ‘IT’S A FUCKIN’ RAIIIIID,” before hiding the drugs and ingesting cocaine while hiding in one of the home’s bathrooms.”
In the video, directed by Tomas Lenert, OZZY and Post Malone team up for a truly wild ride. The clip begins with OSBOURNE and Malone at the infamous Bel Air, CA house (which served as the inspiration for the song) before they lead police through the streets of the city and passing iconic Los Angeles landmarks on their journey.
“A couple of years ago I didn’t even know who Post Malone was,” OZZY says. “Since then we’ve worked together on two studio tracks and have performed together twice. Understandably Covid-19 made it difficult to get together to shoot a music video for ‘It’s a Raid’ so we opted for this wildly imagined animated video for the final single from the ORDINARY MANalbum.” OZZY, who’s been in the studio working on a new album with producer Andrew Watt, adds that he “can’t wait to for everyone to hear my new music.”
This marks the second duet with Malone. The two previously teamed on “Take What You Want” from his Hollywood’s Bleeding album (which they also performed at last year’s “American Music Awards”). The track was produced by Watt, who collaborated with OSBOURNE for ORDINARY MAN as both producer and co-writer.
Here’s some critical feedback on “It’s A Raid”:
BILLBOARD (2-20): The track is “is a blitz of screaming metal that finds Osbourne in classic spooky grandpa mode, wailing about voices breathing through the phone, never feeling alone and the horrifying revelation that God is actually Satan, and he’s waiting right here for you. ‘Out in Hollywood, I’ve been locked up for seven days/ I’m never coming out/ Why do i feel my life accelerate/ I’m never coming down,’ Osbourne sings on the chorus over raging, double-kick drums and a wall of high-speed guitars. Leaving behind his hip-hop cadence, Posty straight up sings in his best Ozzy bellow, lamenting, ‘Outside my window, there’s a silhouette/ My rifle’s right beside my bed/ Hold on, I’m runnin’ out of cigarettes/ F–k!’ The thundering track ends with a final raging chorus featuring both singers and some flat-out shouting of the title over a light speed guitar solo.”
ROLLING STONE (2-20) described the song as “the thrashy new track, Osbourne takes the lead with Malone serving as Osbourne’s backup singer and hype man for the rest of the track.”
LOUDWIRE (2-20): “the high-energy number ‘It’s a Raid.’ The blistering rocker lands among the eleven tracks on Osbourne’s twelfth solo album Ordinary Man…A punky but catchy burst of audio, it’s perhaps the most adrenaline-fueled of the growing collaborations between the “Prince of Darkness” and the rock-indebted rapper.
IHEART (2-20): “The explicit track is set at a breakneck tempo and features Ozzy and Malone trading lines before unfolding into a half-time crawl in the bridge.”
SPIN (2-20): “The song is a banger…”
In its first week of release, the critically acclaimed ORDINARY MAN–OSBOURNE’s first new solo album in ten years–was the #1 rock album in the world, topping multiple charts in its triumphant first week of release. Worldwide, ORDINARY MAN entered the charts in the Top Ten in seven countries(including America and the U.K.) making it the highest charting album of OZZY’s career.
ORDINARY MAN marks OSBOURNE’s first new solo music in almost 10 years. Recorded in Los Angeles, the album features producer Andrew Watt on guitars, Duff McKagan (Guns N’ Roses) on bass and Chad Smith (Red Hot Chili Peppers) on drums. Beyond the core band, ORDINARY MAN, features a who’s-who of OZZY friends and collaborators including Elton John, Slash, Post Malone, and Tom Morello.
Website
Facebook
Twitter
Instagram
Spotify
YouTube

There’s Life After Bobaflex for THE LONELY ONES